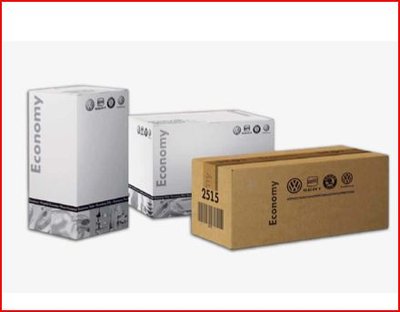 Volkswagen has launched a new range of 'Economy' parts, specifically designed for vehicles over 5 years old and as a direct competitor to 'pattern' parts.

The Economy range won't cover the entire VW parts file but at an average of 25% cheaper than Genuine Parts and sporting the same warranty, it's a good option to have.

Contact us to check the eligibilty of your vehicle.

"If economy parts are cheaper, surely they're inferior to Genuine Parts?"

No, Volkswagen Economy parts meet the same performance and safety requirements as the original VW Genuine Parts but have a slightly modified design, materials and reduced number of variants, allowing the manufacturer to reduce the cost and pass the saving on to the customer.

"Why aren't there economy parts for my vehicle?"

Economy parts aren't available for vehicles less than five years old. The complete parts range isn't covered for these vehicles either although it's expanding quickly.

"So the bits are cheaper so I guess the warranty is reduced as well?"

Certainly not! All the alternative parts are tested by the factory to meet the normal Volkswagen high standards and therefore VW is confident to offer the same 2 yr UK warranty as provided with the original parts.

"How can I tell that the part is from the economy range?"

VW economy parts are identified by the first 3 numbers or letters of the part numbers being replaced by JZW. 071 115 562 C becomes JZW 115 562C. Some of the items come in a more basic design of box.

"So what sort of parts are available?"

The range will increase over time but just some of the initial parts include Filteration, Brake Pads & Discs, Exhausts, Batteries and Shock Absorbers.