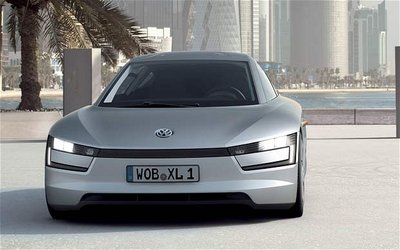 Is this the future of Motoring?

This is the Volkswagen XL1 - the worlds most fuel efficient car turning in 313 mpg. A two seater, two-cylinder 800cc turbo diesel engine with a 20kW electric motor. Access is via the gullwing doors.

It's not the first time that Volkswagen has hit the headlines where eco issues are concerned. In 1999 VW produced the 3-litre Lupo. No, not a Lupo with a 3-litre engine but one that could do 100km on 3-litres of fuel. That's an amazing 94mpg.

The 2011 Qatar Motor Show saw the press release of the XL1. The future starts here.

The XL1 is powered by half of an aluminium 1.6 TDi Polo engine. This produces 47 PS with 88.5lb/ft of torque. The electric motor adds a further 27 PS and an impressive 74lb/ft. The rear wheels are driven through a 7 speed DSG twin clutch box.

In normal driving the electric motor drives the XL1. If the battery drops to less than 20%, the driver requires full throttle or speeds of over 62 mph are reached, the diesel engine cuts in and takes over. The battery is then recharged or can be plugged in at home, taking just over an hour to full. The vehicle can go for 22 miles on battery power alone.

The body and production process

20 years ago 'drag coefficient' was the buzz word. 'Safety' was a word just used by Volvo while other manufactures battled to better each other to produce production cars of 0.30 coefficient or even the earth stopping 0.29 of the Vauxhall Calibra.

It's long been know that the 'tear drop' is the most air defining shape. With its polymer monocoque carbon reinforced fibre body the XL1 becomes the worlds most aerodynamic car at 0.186. Cameras replace wing mirrors to keep drag to a minimum.

The production process in highly complex. The procedure, know as 'Resin transfer moulding' involves epoxy resin being injected into a mould. It's then compressed and heated, thus retaining its shape. The resultant shell weighs 20% less than an aluminium body but costs up to 80 times more than a steel stamped product. As such, production may only reach 5000 units a year.

The XL1 is a similar size to the current Polo but considerably lower. There's room for a 6ft driver and passenger and a small space for luggage behind the rear engine layout. The overall vehicle weight (795kg) is kept low with the use of magnesium wheels, aluminium calipers and steering components and ceramic brake discs. The body takes up just 184kg (23%) of the car with the drive train (277kg), running gear (153kg), electrics (105kg) and interior (80kg) making up the difference.

Whilst vwgenuineparts.co.uk has researched the facts to the best of its ability, the opinions expressed in this article represent those of individual writers and unless clearly stated as such do not represent the opinions or policies of vwgenuineparts.co.uk. No claims are made or responsibilities assumed for the contents of externally linked websites. Unless otherwise stated, all contents are copyright Â©