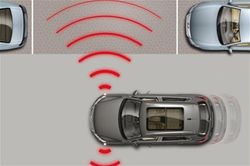 Whilst some worry, unnecessarily, that 'more gadgets' means 'more to go wrong', most of us accept that the rapid advances in technology simply makes our lives safer and more convenient.

Some of the following features are already available as cost options. Just as 20 years ago we were paying for electric window upgrades, we now laugh when we see a winder handle and have to explain to the kids what they did. The same can be said of these current 'high end' options as they become standard features over the coming years.

For some while now Volkswagen has offered 'Park Assist', a system that uses front, rear and side parking sensors to measure parallel parking spaces and takes over the steering wheel movement while the driver controls the speed. The feature positions the vehicle just inches from the kerb and will park within a gap just 1.1 metre longer than the car itself.

In development now is 'Park Assist 3', dealing with the final parking possibility - forward 'nose in' first. Once activated, the vehicle will turn in itself, request you select reverse, back up and then drive in forwards to the final resting place.

Cameras at the front and rear as well as mounted in the underside of the external mirror cases allow you manually park in very tight spaces.

Reversing out of a 'nose in' space is just as hazardous as all too often a vehicle being driven past can be clipped. This system will apply the brakes if it senses a vehicle approaching from the side.

Finally, although illegal at the moment, there's no technical reason why a car can't be parked without a driver. Using a smartphone or remote control a vehicle could be positioned in a garage for example where it's too tight to open the door. That's real space-age stuff.

There have been many high profile cases of major incidents being caused by falling asleep at the wheel. It is estimated that 20% of all motorway accidents involve the driver 'nodding off'.

Volkswagen's have a feature called 'Lane Assist' which monitors the kerb as well as the centre white lines. If you stray off course the computer gives the steering wheel a shake to make you aware of the potential danger.

As a visual reminder, a lot of vehicles now come with a 'take a break' after 2 hours reminder on the multi-function dash display.

As a follow on function of 'Lane Assist', if the electronic control unit (ECU) doesn't register a manual correction of the steering wheel it presumes that the driver is falling asleep. Firstly a chime sounds, getting progressively louder. Next, the brakes are 'jabbed' and released hopefully jerking the driver awake. As a last resort (if the driver has blacked out/had a heart attack for example) the ECU turns on the hazard warning lights and brakes the vehicle gently to a stop whilst still maintaining lane control.

City braking is designed to prevent those low-speed rear-end knocks, especially common on roundabouts where the driver is looking right for a gap and the person in front hasn't moved off. City braking, using the front sensors, applies to brakes to avoid the accident.

Until now, the system could only sense a reflective surface in front of it such as a bumper or boot lid. Pedestrians stepping out between cars would not be catered for. With the new developments, a front-mounted camera and radar unit make it possible to register a person on a collision course. An electronic version of a hydraulic brake servo reduces stopping distances by 1 metre at 20mph. It doesn't sound much but that could be the difference between a near miss and a life-changing event.

Blindspot mirrors have been standard for many years but even they have limitations. Audi introduced Side Alert and Volkswagen now has Blind Spot Monitor. A radar sensor mounted in the door mirrors detects a mass beside the car and brings on an orange light in the casing, warning the driver not to change lanes.

The cones in a motorway contraflow can be very confusing, especially in the dark or in poor visibility.

With the help of Lane Assist and various cameras and ultrasonic sensors, a vehicle can drive itself safely through road works. A further advance in LED lighting projects a beam on the road, the same width as the car, showing the driver the desired path. While these features could be a while away yet, all manufacturers have agreed on a common standard of an audible warning if the car gets too close to the barriers.