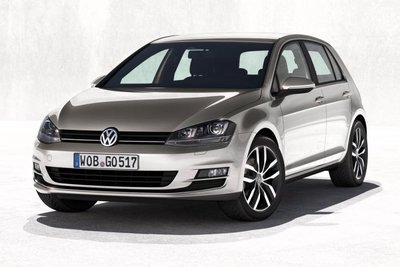 First shown in Berlin on 4th September 2012 the 7th generation VW Golf has a more chiseled and aggressive looking front end compared to the out going Mk6 model. This brings it bang up-todate without upsetting the traditionally conservative Volkswagen buyers. Clearly, 29 million Golf owners over the past 36 years cannot be wrong.

It's 56mm longer than the Mk6 and 13mm wider but still saves an impressive 100kg in weight with thanks to the use of high and ultra-high tensile materials used in the chassis. Height wise the new Golf Mk7 is 28mm lower, aiding the 10% decrease in the drag co-efficient which is now down to just 0.27 cd.

Where the inches really count is on the inside. By moving the front wheels 43mm forward Volkswagen has created an additional 15mm for rear seat passengers, while also moving the rear seats back by 20mm to help taller drivers. In this game, size matters.

The boot now adds another 30 litres of capacity bringing it to 380 litres. VW hasn't forgotten you when it comes to loading that heavy shopping with the boot sill at just 685mm. A very useful option is the forward folding front passenger seat, which gives a load through of 2.4 metres. No excuse not to get on with that DIY project then.

The new Mk7 now comes with a standard 5.8 inch colour touch screen radio/cd unit with an optional 8 inch Sat Nav giving 'pinch and zoom' functions, along with a proximity sensors that displays previously unseen buttons as your hand approaches. USB/iPod/Mp3 connections, DAB and bluetooth phones functions all feature too.

For the first time, the new Golf has an electronic handbrake. If you're familiar with early Passat models you'll know that a button on the dashboard makes no sense. However, if you've had the pleasure of experiencing later Passats or Tiguans you'll be aware that the 'pull up, push down' switch in the centre console is spot on. That's where the new Golf has its button positioned - so good news.

Braking systems feature heavily in Volkswagen's safety onslaught. First off there's 'Multi-collision' braking which is standard on all models. This automatically brakes the vehicle after a collision and thus reduces the kinetic energy to lower the risk of a second impact.

Also standard is a 'PreCrash' system which detects a possible accident and pre-tensions the seat belts. It even shuts the windows and sunroof whilst still allowing a small air gap to allow the airbags to function to their maximum efficiency.

Adaptive cruise control will be standard on UK spec SE models and above. It uses radar to keep a safe distance from the vehicle in front. It also has the ability to bring the vehicle to a complete halt from as much as 93mph (150km/h).

City Braking works at up to 19mph (30km/h) and like adaptive cruise control can stop the vehicle before a bump if you fail to do so. Don't ask your sales person to show you while on you're on test-drive though. Quite rightly Volkswagen UK has insisted it isn't demonstrated, for obvious reasons. It must also be noted it won't stop you hitting someone who's just stepped off the pavement. It requires a reflective surface to work, such as a car bumper.

The Passats 'Drive Alert' system has come across to the Golf. It checks driver's inputs to the steering wheel and detects if you're nodding off. A camera operated 'Lane Assist' system can keep the vehicle between the lines of a lane and even counter steer to keep it on track.

Dynamic Light Assist cuts off the main beam as it sees on-coming traffic to prevent dazzling. Static cornering lights will also be a worthy option.

If you're familiar with some high powered sports motorbikes you'll have heard of this. The Golf allows the driver to select a number of driving 'styles'. There are 5 options, namely - Sport, Eco, Normal, Individual and Comfort in combination with DSG gearboxes only. On selection of a 'mode' the vehicle changes various engine parameters accordingly. For example, in the 'Eco' setting engine power output is reduced and even the air conditioning system is controlled to squeeze the maximum miles per gallon of fuel.

The Mk7 Golf range will kick off with a complete set of 'new generation' EU5 and EU6 petrol and diesel engines with start/stop technology.

The petrol versions will be the 1.2 TSi producing 85ps while the 1.4 TSi churns out 140ps and features 'Active Cylinder Technology', allowing it to run on just half of it's 4 pistons.

When available, the 1.6 TDi Bluemotion model will do just 85g/km - the worlds lowest emmission production vehicle.

The range will start with S, SE and GT trims, both in 3 and 5 door versions. BlueMotion, GTi and GTD will follow in mid 2013.

Due to the enhanced safety features across all the models, the new Golf insurance groups have dropped by as much as 4 levels when compared with the out-going vehicle. ABI ratings (advisory) can be found in the table below.

The 2012 Paris motorshow will be the official public unveiling with sales in the UK from October and the first customer deliveries expected in January 2013.

Please note that some images may not represent UK spec

Whilst vwgenuineparts.co.uk has researched the facts to the best of its ability, the opinions expressed in this article represent those of individual writers and unless clearly stated as such do not represent the opinions or policies of vwgenuineparts.co.uk. No claims are made or responsibilities assumed for the contents of externally linked websites. Unless otherwise stated, all contents are copyright Â©